I watched Machete in the theater when it was released, and I don’t remember exactly how much I liked it.  As such, I cannot give a recommendation per se, but I think you’ll probably have a good time if you like the trailer.  This is one of those movies where you know if it’s up your alley.  Mainly though, I just wanted to post a high-res image of the awesome poster!

When watching Alejandro Jodorowsky’s autobiographical The Dance of Reality, I was reminded of the great Italian tribute to movies, Cinema Paradiso.  And while I was solidly held by Dance, I at no time felt the passion that was instilled in me by Cinema.  There’s a good story told here, for the most part well executed and mixed with lots of great visuals, but it did not strike me on an emotional level the way it might have.  I liked it very much, but I’m not gaga.  Colin Covert of the (Minneapolis) Star Tribune sums it up best:

The story is patchy and stitched together, but Jodorowsky’s images can be stunning, and his ability to acknowledge pain without being depressing is a rare gift. The film is a wayward dream but well worth embracing.

The Dance of Reality arrives on the heels of Jodorowsky’s Dune, a highly regarded documentary which I missed.  Apparently, Jodorowsky has been making movies since the sixties, but I had never heard of him.  My interest is piqued: I look forward to any future output by the director, and will seek out past triumphs.

Though I wasn’t over the moon about The Dance of Reality, it is an entertaining film and a good choice for those in the mood for a little Chilean flavor.  7/10

When I reviewed last year’s Out of the Furnace, I said that there was not much reason for its existence.  The same could be said for The Signal, an overall fairly weak sci-fi movie with a few good ideas.  Many of the individual pieces were adroitly pulled off, but as a complete unit the film was mishandled.  I will give it credit for keeping me interested from start to finish — usually enough for a recommendation, but not here.  For anyone who as seen it, I take the incongruous behavior of the girlfriend as an analogy for the The Signal‘s failure.

Safety Not Guaranteed, Moon and The Box demonstrated that smaller-scale sci-fi projects can succeed when there is a grand vision in play.  No such luck here.  5/10

Does it seem like there are more big (as in big budget) movies this year?  It occurred to me watching trailers a while back that this year if filled with one giant production after another.  I remember when each year would welcome three or four big-budget, special effects-laden movies.  Not the case any more, it seems.

the Galaxy, and for good measure a Twister remake, Into the Storm.

Now add on the Age of Antiquity films I wrote about: Pompeii, the 300 sequel and Noah.  At Christmas is coming Ridley Scott’s Exodus: Gods and Kings.

Now that is one HELL OF A LOT of big-budget movies.  Complete saturation.  And I am quite certain I am leaving a few big ones out.  So what’s my point?

I heard a news flash a few weeks ago that box office revenue is up this year, but somehow I doubt enough to keep up with all the spending, which begs the question: have these studios learned nothing?  I refer to my post Big Movies Go Bust — from just last summer.  I suppose we’ll just have to wait and see if all the expensive projects this year translate into profits, because all I see is Hollywood quadrupling-down on the blockbuster. 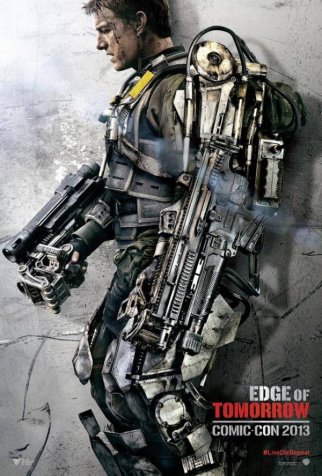 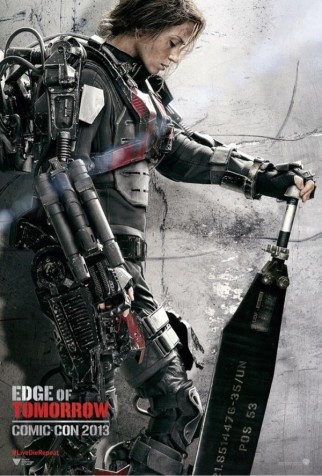 SURPRISE SURPRISE!  A good action movie in 2014!  And who woudda thunk it: Emily Blunt an action star?  Tom Cruise does well here too — I’ve been a longtime fan of his, and was dismayed that he was shunned for a period because he jumped on a couch.  In any case, Edge of Tomorrow is good old fashioned story telling and successfully executed sci-fi — a rarity these days.  Essentially a dramatic version of the great comedy Groundhog Day, Edge of Tomorrow, also like the Bill Murray classic, continues to evolve and remain fresh throughout.

Watching this movie in 2D but on an IMAX-sized screen made me realize some things about movies seen in 3D.  As I’ve commented before, 3D won’t rescue a bad movie.  But Edge of Tomorrow made me understand that for the most part 3D is an unnecessary distraction.  It’s cool at first but after the novelty wears off (often by the time the trailers are through), 3D does nothing to further engage you.  Exceptions do exist; Gravity, most notably, was obviously enhanced with 3D — though I reckon a good theater 2D presentation would not leave a moviegoer feeling let down.  That’s because good movies don’t depend on 3D.

Edge of Tomorrow has a strong enough story that I am very happy I saw it in 2D, and I truly believe I would have been less engaged with the 3D glasses on.  Unfortunately, vastly inferior films like Godzilla and X-Men have done much better at the box office this year.  Reverse the trend!  Go out and see this very entertaining movie.  8/10

A couple very cool scenes in the first half are killed off by utter boredom in the second.  Highly rated on Rotten Tomatoes, so maybe I’m missing something — but I doubt it.  And how many times do we need to see someone strapped down to a chair while his “other consciousness” is doing battle in another time and/or place?  We saw that in The Matrix; is it possible for filmmakers to come up with anything original?  4/10

I don’t care what anybody says, Wild at Heart is a great film.  Roger Ebert, who I admire greatly, called the movie “dishonest.”  But then I don’t think Ebert ever got David Lynch — he gave a thumbs down upon seeing the great instant American classic Blue Velvet — indeed one of the greatest films of all time.  I’m not suggesting that Wild at Heart is at all up to the level of Blue Velvet, but if you’re part of the “Lynch Mob” as I am, you absolutely love it.  Peter Travers of Rolling Stone was among the critics who were able to appreciate the movie:

Starting with the outrageous and building from there, he ignites a slight love-on-the-run novel, creating a bonfire of a movie that confirms his reputation as the most exciting and innovative filmmaker of his generation.

With foreshadowing of the mystical elements that would pervade Twin Peaks, Wild at Heart soars as the great alternative telling of Dorothy’s journey through Oz.  More and more, especially looking at the still of Lulu and Sailor punk-dancing in a roadside field, I draw parallels to another film of that era, also by a gifted director: Natural Born Killers (stay tuned for my long awaited Oliver Stone post(s).  One key difference: Lynch stopped making movies; Stone stopped making good ones).  My recommendation: watch both as a double feature.