Pursuit – run-in, pursuit – run-in, pursuit – really big run-in, end of movie.  This basic, worn out, unengaging and paper-thin plot structure is the bane of many superhero and “action” films, and to some degree explains the disparity between the Tomatometer and my score on a movie like Logan.  Almost makes you wonder if all these other critics are so dim as to not recognize the formula, or somehow think it novel.

I liked the feisty girl, and the performances in general were OK.  I’m a bit of Hugh Jackman fan — from Les Miz at least.  Add in a little fun to get 4/10.

Comparison Notes: the much better Mad Max film from a couple years back

Some movies inspire numerous alternate posters and art, often unofficial or fan art.  Donnie Darko is the prime example of this phenomenon.  Donnie Darko is also a truly magnificent film, in a class by itself — something The Neon Demon could only dream of.  But credit must be given to the cool visuals within The Neon Demon, and the imaginations ignited by it.  As with Donnie Darko, I think my favorite poster is the original (above), but I love to see what people have created; a mere sampling:

Get Out is thoroughly entertaining and just plain good — a nice surprise.  I think it likely to hold up in the Top 10, even with the assumption that this year will fare much better than last.  Is it on the level of another ‘get out’ story, Ex Machina from a couple years ago?  Not quite.  But it’s a fun, frightening feature for folks (quintuple-‘F’!!).

Now compare to that last effort by M. Night Shyamalan.  No comparison, and M. Night’s been doing this for decades.  It makes it all the more remarkable what Jordan Peele (yes, of Key & Peele) has accomplished.  Let’s see, he wrote and starred in Keanu.  The

cat movie.  Well-regarded, but a silly cat movie.  Very next movie, Get Out.  Whoa, what a turn.  Much respect.  Quite the way to break out of slapstick.

There are a few silly moments in Get Out, which serve nicely as comic relief.  You might call them ‘audience pleasers.’  They weren’t bad at all, but hardly integrated into the larger story as deftly as the Coens or Vince Gilligan would pull off.  So a little incongruity there.  But no matter: I urge you to Get Out and see this movie.  8/10 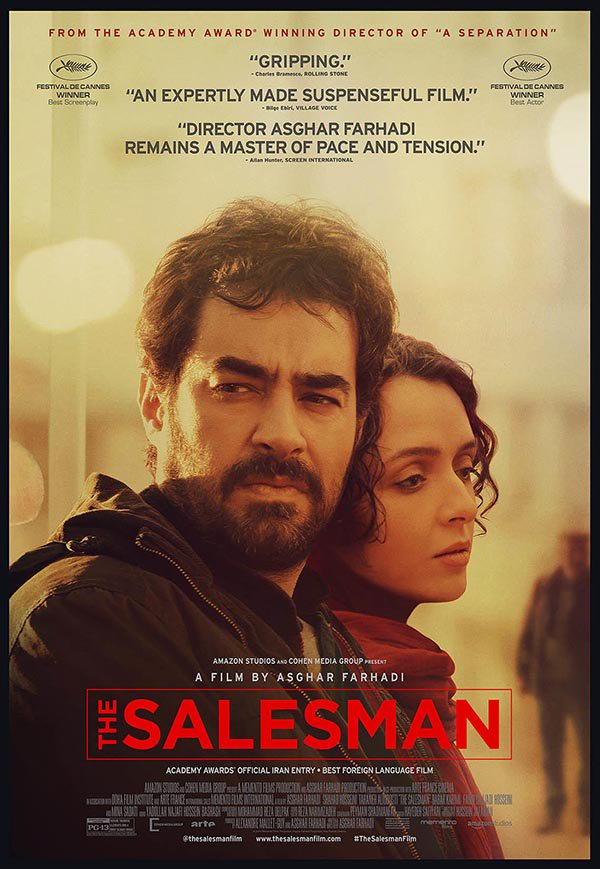 If you cross House of Sand and Fog with Prisoners and watching paint dry in Tehran, you might end up with something like The Salesman.  This movie won the best foreign film Oscar, which completes the Academy’s trifecta of totally blowing it for the 2016 season.

Critics adored this film and the director’s last U.S. release, About Elly.  The Salesman was marginally more interesting than About Elly, but both offer more proof of critical praise based on political correctness.  And movies from Iran, I suppose, are still such a novelty that anything must be good in the critics’ eyes.

If one took this exact same movie, set in Chicago or Tallahassee and in English, critics would be screaming about how bad it is.  An oddity I noticed on this one: careless errors in the subtitling.  Amazon Studios really phoned it in on that.

The Tomatometer is so wide of the mark on foreign films generally, and especially those

of this director, that I’m done with these type of recommendations, at least until such time that a trailer really grabs the hell out of me.  I found The Salesman to be gutless and uninspired.  Beyond that, obvious implausibilities weigh on the story.  A bit of effective drama toward the end raises it to 4/10.