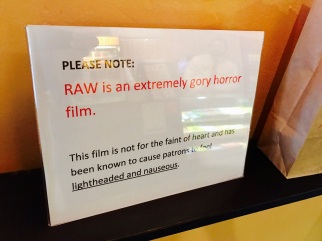 I love good edgy indies foreign and domestic; Raw is not one of them.  I wasn’t buying most of it, and there wasn’t enough style or substance to overcome its many issues, for example I never felt like I was watching students at a veterinary school, but maybe some sort of weird cult.  More problems:

SPOILER ALERT!  SPOILERS ALERT!  This girl is a devout vegetarian one moment, and the next, for no good reason, is scarfing meat down with abandon.  Vet students are animal haters?  And she grew up never seeing her father with his shirt off?  These and many other issues toss Raw down to B-movie territory, except there’s not enough fun to elicit that B-movie charm.  Forced, inorganic storytelling exacerbates these weaknesses.

Still, there was a certain raw, explosive power to the movie that kept it engaging.  But even in this regard, when the director was holding a straight flush she folds.

On top of everything else, Raw just wasn’t as original as it’s been made out to be; see Comparison Notes.  Entering the local arthouse, I was told that someone had fainted during a previous showing.  Barf bags and warning signs were hastily dispatched.  I so wished that Raw lived up to all the hype.  5/10

Comparison Notes (all recommended): for infinitely better French ‘fare’ about consumption of human flesh — which they have a knack for, check out the greats Delicatessen and Les Amants Criminels; Teeth, every vampire movie ever (Only Lovers Left Alive looks like a masterpiece by comparison), Antichrist, The Neon Demon