Love this poster.  Haven’t seen the movie, but want desperately to….  I imagine it as an atonement of sorts for Escape from Tomorrow.

Surprise!  Rotten Tomatoes gets it right!  The consensus:

So, yeah… I liked this movie.  Fun.  I’m on the cusp of a 7, but my main issue was it never really scared me, and achieved dramatic tension only a couple brief moments.

Something that normally irks the heck out of me is no starting credits, but with this it’s understandable… the title is practically a spoiler.  And it’s compensated for by two factors: The Universal stuttered roll-out, and fun end credits.  On the high side of 6/10.

I never would guess that a sequel to Blade Runner starring Ryan Gosling and Harrison Ford would make the original look like some kind of masterpiece by comparison.  The deeply flawed original, at least, had some compelling narrative elements and methods, and a unique design sense.  The sequel has a lot of great visuals and impressive loud bassy sounds (at least in my Dolby 7.1 theater), and even a few entertaining scenes.

But mostly, it’s a lot of conversations that amount to nothing — much like P.T. Anderson’s Inherent Vice.  Like the Anderson flop, almost nothing happens in 2049.

Without those visuals and dynamic audio — the ambience of the film, and a little fun dramatic wrangling, we’re talking 2/10 and at nearly 3 hours, a colossal bore.  As-is: 4/10.  Still boring, but not as bad as nails on a chalkboard.

A couple more comments about this movie.  First, it’s another one critics swung and missed at.  Same incompetence which would lead to panning Oldboy or the English version The Girl with the Dragon Tattoo, I reckon.

Now the whole thing about Replicants being some evil force, without ever depicting, and indeed barely explaining, why they’re such trouble.  With The Terminator, you know the cyborgs are bad.  In Alien, the robot is out for corporate interests at the expense of the crew.  In The Matrix, humans have been enslaved by the machines.  But Replicants don’t seem like much of a threat.  That is the utter failure of both Blade Runner and its sequel.

One more thing:  I appreciate slowness.  A movie taking its time.  David Lynch can just hold the frame whilst holding the audience in his grip.  Kubrick, with his slow scrolls and pans, kept you enrapt.  2049‘s director Denis Villeneuve is no David Lynch, and no Kubrick.  You see, that only works if you are already in the midst of compelling tale.  And if you are a competent director.  I liked Prisoners, but boy Villeneuve is in a slide.  To the abysmal Sicario, and lame Arrival, add 2049 to the growing pile of overrated claptrap by Villeneuve.

Besides the fact that this guy is really old, there’s not a lot going on here.  But the old guy is Harry Dean Stanton, and I like him.  Seeing some other old timers was nice too.  The script is too full of contrived pontificating, but there is sweetness as well.  6/10

PS The director apparently has no direct familial relation to David Lynch. 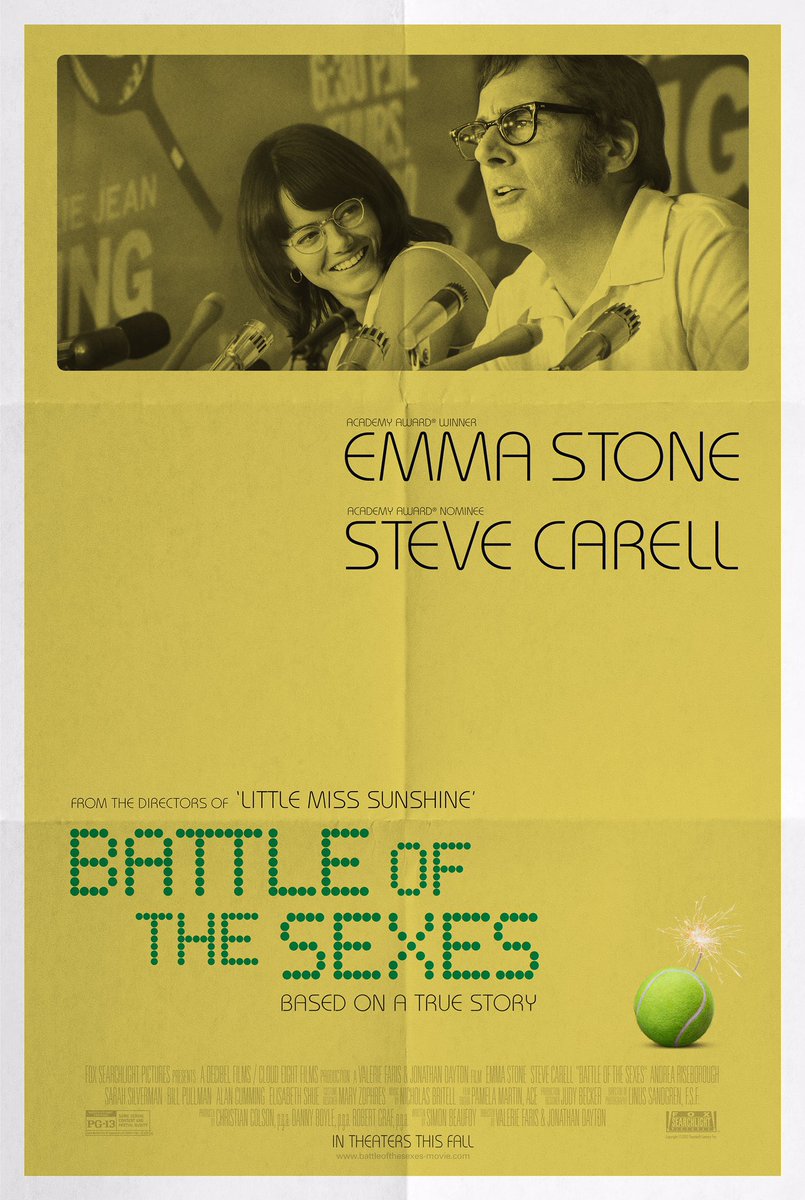 If you’re looking for a respite from all the Friday the 13th movies this season, I’ve got just the ticket.  There’s something very vanilla about Battle of the Sexes, with direction — by two people — that adds up to a perfect cross of competent and after-school amateur hour.  But the movie does a decent job showing how prevalent and readily accepted sexism was in the early 70’s, to the point that it almost seems contrived.  And these well-played characters were fairly endearing, so 6/10.

Note for period filmmakers out there: don’t show skyscrapers in your movie that won’t be built for 10 years.  NG (not good).

Normally I’m not thrilled about turning the entire month of October into a Halloween celebration, but I’m in the mood this year.  So are the movie studios; having a Friday the 13th in October helps I reckon.

It often feels like a throwback to both classic ’80s Spielberg flicks and anthology shows like Amazing Stories, and to classic slasher-hackers.  The cinematography and direction are refreshingly old-school.  And while the occasionally scattershot film lacks cohesion, it makes amends with moments of lyric mirth and an intimacy among its characters normally lacking in such endeavors.

It, a.k.a. Stranger Things with a Clown, delivers a twinge of fear right at the beginning, with the clown in the gutter.  That moment when we don’t know what will happen is very effective — until something does happen.  And once it does, It traverses from scary to silly and never quite comes back.  Or maybe put another way, from adult-scary to kid-scary.  Once that edge is removed, It was not able to frighten me as much as it tried.

Then in the latter part of the film, the worst thing imaginable happens: It becomes draggy.  Nonetheless, on the strength of its assets, It rises to a marginal 7/10.

Comparison Notes (recommended & essential): Stand by Me, E.T., The Ring