Once Upon a Time… in Hollywood

Just in time for the Oscars, which snuck up on me this year. * = Seen via streaming. Worst to first:

End Note: An abbreviated list this year. I think there just weren’t as many movies that I felt compelled to see. A small year for movies.

Don’t Worry, He Won’t Get Far on Foot

Can You Ever Forgive Me?

2018 was the worst year in movies since I’ve been doing my blog (2012), and probably since long before that.  An abysmal year, with almost nothing released that anyone will care about or remember in five years time.  Makes you appreciate 2017 so much more.  So here goes — *Asterisk denotes the film I saw at home via VOD:

Annihilation — 4/10.  I’m amused how this highly touted and highly hyped film has already been utterly forgotten.

End Note (in 3 parts): Yup, Top 3.  Those are the only films of note this year, the only ones that come this time next year I will remember with a fond heart.  Special mention to Upgrade, a surprise entertainment — I almost fashioned a Top 4, but that just didn’t have a ring to it.

Obviously, I have to choose the best prospects of the movies which are released in any given year.  So maybe I’m just missing out.  Maybe 2018 was a better year for films than I am realizing.  Maybe Bohemian Rhapsody and Mary Poppins are really that good.  Maybe I’d like If Beale Street Could Talk, but I’ll probably never find out.  Maybe Green Book or Vice — but I just have zero desire to see any psuedopolitical movies.  The real politics we are dealing with are much more compelling.

It’s hard not to think that the down-swing of films this year is connected to the explosion of television VOD.  But then, that didn’t hurt 2017.

The Shape of Water

2017 saw an uptick in films compared to the previous year, but it was hardly stellar.  Having no films that I could rate a 9 is disappointing.  2013 and 2014 spoiled me I reckon.  *Asterisk denotes films I saw at home via VOD.

9. The Little Hours I’m upgrading from my original score.  Best comedy of the year — this one grew on me.

4. The Florida Project (Not the best of the year, but probably my favorite), Thelma, The Killing of a Sacred Deer, and Ingrid Goes West are four in fourth.

1. Get Out and I, Tonya — Clearly the Best Movies of the Year.  I can’t call one over the other.

End Note: What would my year-end list be without an end note?  In this case, I just wanted to point out that there is not a large delta between number 1 and number 10 above, hence the ties.  All are very good and worthwhile films, so watch a trailer or two and decide which one’s for you.

End Note #2: This year there were a lot of repeats in movie titles: Wonder, Wonder Woman, and Wonder Wheel; Lucky and Logan Lucky, Lady Bird and Lady Macbeth.  To stretch the idea out, you could throw in It and It Comes at Night.  And if It had been the It that came at night, It Comes at Night might well have been a whole lot better.

Sometimes it takes a true story to make the best movie of the year.  This is one of those times.  The first half absolutely soars.  Once the movie shifts to “the incident,” it gets a little off track and bogs down, but is redeemed by the end.

I, Tonya opens with the following blurb:

Like a Michener account, and the disclaimer above speaks to this, there is a sense that this is not necessarily the verbatim truth of everything exactly the way it happened — but boy it sure feels like it is.  It really puts you there — and it’s highly compelling.

Propelling I, Tonya is a glorious tour de force by Margot Robbie — clearly the best female performance of the year.  Allison Janney as her mother is utter perfection as well.  Both should be winning Oscars on March 4th — but sadly won’t.

With the Winter Olympics next month, the timing could not be better.  You’ll definitely come away with an understanding of the tricky triple axel that you didn’t have before.  And one final note: make sure to stay for the end credits.

Updated on 20 Feb. 2017 to include three films viewed post-post.

Last year about this time, I bluntly stated “2015 was a terrible year for movies.”  Hence I named my end-of-year post “The Best and Mostly Worst of 2015.”  For some time I had thought that compared to the last, thankfully expired year of 2016, 2015 was practically a golden age of cinema.  That maybe 2016 in movies was analogous to the awful year it was in politics.  Actually compiling this list, however, makes me realize that 2016 wasn’t that much worse than 2015.  No film last year passed beyond an 8/10 rating; there were lots of so-so 6’s and ho-hum 7’s.  A fair number of good films, but the shining standouts went AWOL.   Just a kind of middling year.

So on to the list.  No need my normal note on home streaming; I saw all these films in the theater.  As usual, worst to first…

1. Hail, Caesar! — 8/10 and Clearly the Best Movie of the Year.  Another grand victory for the Coens, yet swept under the rug.  Watch in a darkened theater, close to the big screen — or the nearest approximation thereof that you can muster.

That’s right, Top Five.  As I said, a middling movie year.  I just couldn’t see highlighting movies that would have been at Number 30 on the 2014 list as a Top Ten pick here, putting them on some sort of equal footing as the magnificent films of that year.

1) Not long ago (to the best of my recollection), films had to be released for at least two weeks in any given year to be eligible for Oscar consideration for that year; that time period has now been squeezed down to one week.  This means the trend of Oscar-contending films being released later in the following year at a theater near you has only gotten worse.  Foreign and independent films are the worst hit by this phenomenon.  Leviathan, for example, wasn’t available to watch locally until March 2015 — after the Oscars.  This is done to boost ticket sales for award-winning movies, but it’s annoying.

I mention this not because I want to go off on a rant, but to point out that I can’t wait until March or April to put out my yearly list.  There’s a good chance that I’ll be seeing more 2016 pictures in the months ahead; if so I’ll make a note of where they place on this list, and/or make an update.

2) As a corollary to point 1), it is widely accepted that any studio who wants a film to compete in awards season must release its movie in the final quarter of the year.  A summer release is iffy, though not ruled out entirely — but it would have to be a film that captured the year’s zeitgeist.  And anytime in the first half, no way.

Again, my main objective here is not to rant, though the release-date blues do get me down.  I mention it because Hail, Caesar!’s February release — and its studio’s opinion of it as reflected by that release — has more to do with its Oscar non-contention than anything to do with the quality of the picture.  As the best of the year, that’s a shame.  But then shame and the Oscars go hand in hand.

I liked La La Land very much, but I can’t say it made my heart sing.  Which is to say I didn’t love it.  Not gaga here.  On the other hand, KCRW had songs from the film playing in rotation the week immediately after I saw it, and I admit they’ve grown on me.  That’s good, because my initial reaction was that the music was a little unoriginal and unmemorable.  Less than ideal for a film that has been hyped to heck for six months and hailed as the savior of Hollywood musicals.

Which is a silly thing to say anyway.  Les Miz and Rock of Ages, from just a couple years ago, were impressive musicals.  Chicago, from 2002, won Best Picture.  And there is no signature tune in La La Land that will be hummed in 30 years.  No “Singin’ in the Rain,” no “Spoonful of Sugar” from Mary Poppins; no “Do-Re-Mi” from The Sound of Music.  Nothing so iconic here.  Nor a single musical performance as jaw-dropping as Anne Hathaway’s in Les Miz. 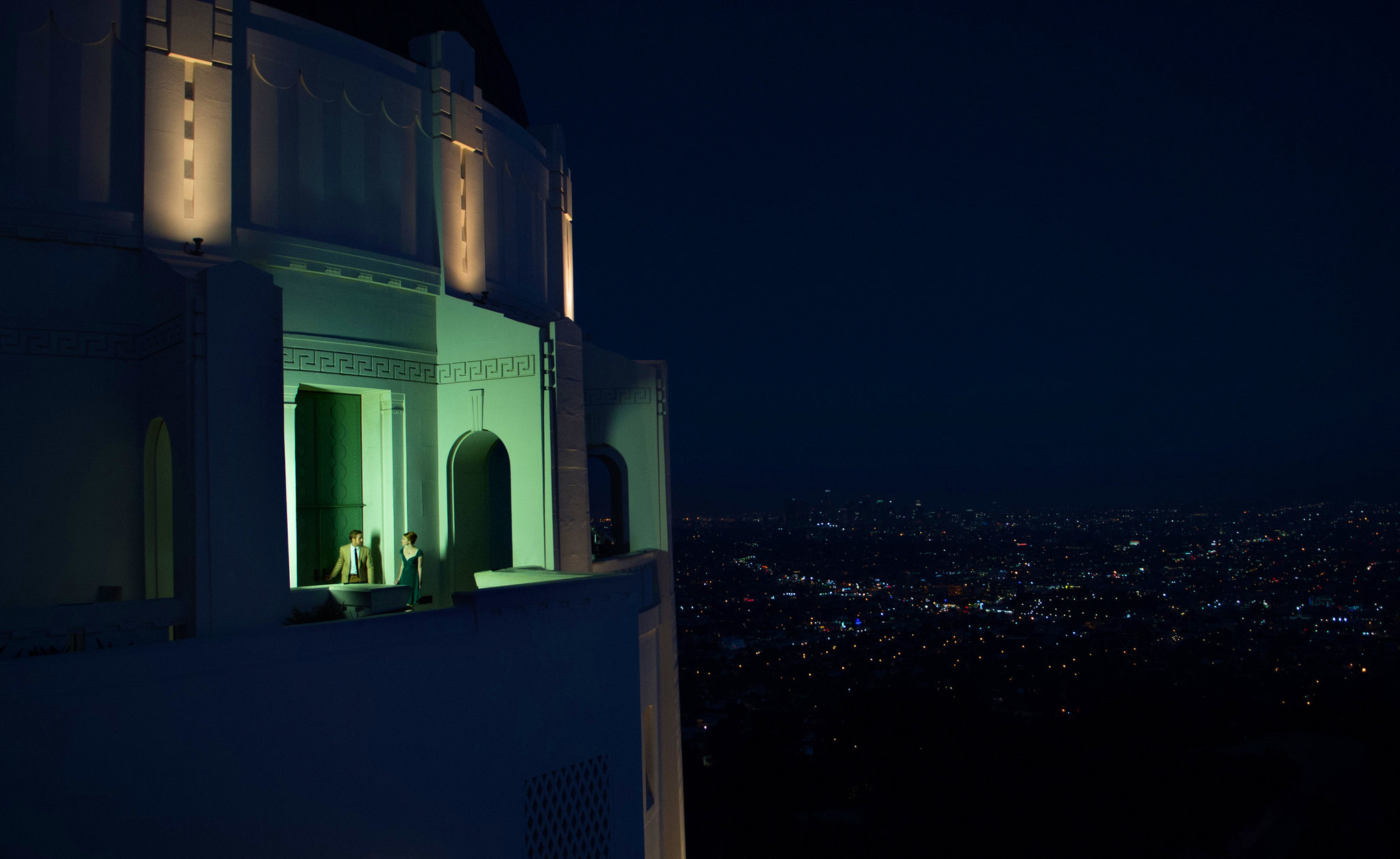 Which is why, in part, nothing shot out at me from La La Land screaming “THIS IS PURE MAGIC,” despite its labors to that effect.  Another reason is the musical scenes don’t feel as organic as they should.  Still, the music is good.  It doesn’t fall into the trap of Inside Llewyn Davis, a musical which features forgettable, even irrelevant music.  Which leads to the assets of this film: astounding performances and magic on film.  Magical individual scenes, that is — not magic as a whole.  But there is one great scene after another — great singing and dancing, and a terrific representation of the eternally mystical, and magical, City of Angels.

Now back to the negatives.  The underlying story is, fundamentally, a repackaged cliché (Flashdance, anyone?  Or better yet, Good Will Hunting) which might have been overcome with more interesting, perhaps conflicted characters.  The two stars don’t really have any faults — they are essentially perfect — and as such are rather 2-dimensional.  This is why Whiplash is a cut above, even without the spectacular flair.

I point out all the flaws of La La Land because this is where my criticism diverges from anyone else’s — which is always the point of this blog.  The picture’s adulation is readily available and practically ubiquitous.  My summary: La La Land ranks just behind Hail, Caesar! as the top film of the year.  And in this exceptionally weak year for movies, La La Land is a freight-train to Oscarland.

Every time I watch a snippet or hear a song, La La Land keeps growing on me, despite my reservations.  Initially I thought I would not need to see it again any time soon, but now — two weeks later — I’m looking forward to some day paying another visit.  It must be more catchy than I first reckoned.  Maybe I am gaga.  8/10

Comparison Notes: Besides the films already mentioned above: Everyone Says I Love You (I have not seen); Recommended: Café Society, Mulholland Dr., L.A. Story, The Player

UPDATE: Since we’re upon the time for my year-end list, I need to officially downgrade Where to Invade Next.  That was never really a 9/10 film, but I was so impressed with the material that I inflated the rating.  Its true value: 8/10, which I think will still counts for top five of the year.  And by the way, we have got to give credit for Michael Moore for predicting the Trump win.  That adds even more credence to Where to Invade Next, and indeed his entire oeuvre.

I had no desire to see Moonlight, but it has proven to have legs and is likely to garner Oscar nominations including the big one.  Plus, I was in the mood for something that might make me think a little.  And so my review:

Act “i”: Great; Act ii: Great; Act iii: Complete and utter collapse.  Also not happy about omission of an opening title.  8/10 if you lop off Act iii, but since the producers did not, thumbs-down; 5/10.